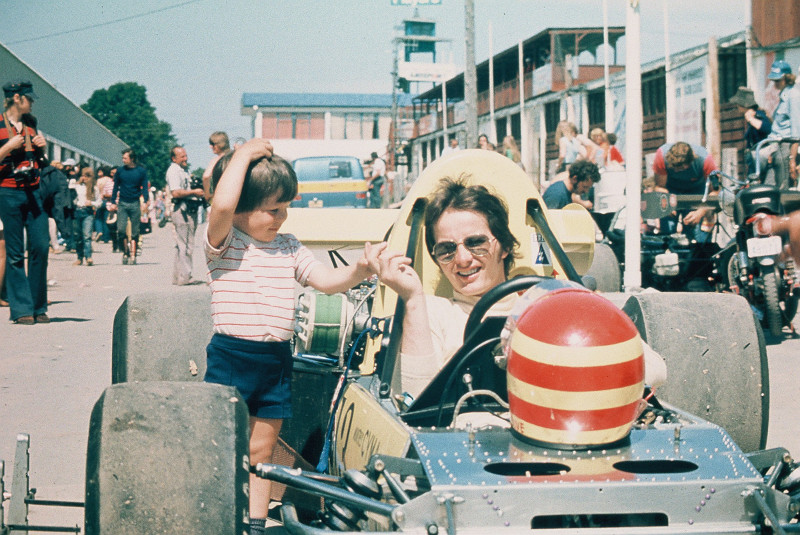 The exceptionnal performances of Gilles in Formula Ford allowed him to reach Atlantic Formula as soon as 1974.

Gilles Villeneuve started his Atlantic Formula career with Team Canada. Back then, his yellow car, the March 74B, displayed the main sponsor of the team, who was the soft drink Schweppes. The car was more powerful than the car driven in Formula Ford. It had a 4 cylinder motor of 1.6 liter and 200 horsepower.

Gilles’s first race was in Westwood, not too far from Vancouver and straight from his first appearance, he reached the 3rd step of the podium. However, the rest of the season wasn’t  all pink and sunshine. He finished 22nd in Edmonton and he wasn’t able to made it to the finish line in Manitoba. He broke his left leg by violently hitting the security rails on the really hard racing track of Mosport. This annoying accident stopped him from participating to the two races following this one; Sanair and St-Johns.

Gilles Villeneuve returned behind his steering wheel one month and a half at the Halifax Grand Prix. He finished the season with an abandonment in Halifax and an accident with the driver Gary Magwood on the first lap of the Trois-Rivières Grand Prix. The 1975 season looked difficult for Villeneuve because he didn’t have enough money to stay in rank in Team Canada. However, the Berthierville’s driver, with his determination and his sponsor, Ski Roule, decided to follow his dream and bought a March 75B.

The 1975 season was going to be a challenge for Gilles because he was the only member of his team. He didn’t have enough money to have mechanics or engineers. It wasn’t a problem for our driver because he was well known for his talents in mechanic even without any formations. The new March 75B was more powerful than the prior model. Indeed, the motorization of the car was a 4 cylinders of 1.6 liter with 235 horsepower. The car had a green livery to represent his sponsor, Ski Roule. Despite many obstacles, Gilles succeeded to win his first victory of the serie with an incredible come back from the ninteenth place to the first step on the podium.  During the 1975 season, Gilles obtained another podium (second place). His excellent results allowed him to climb up to the fifth place of the Atlantic Formula ranking board.

In 1976, Gilles Villeneuve will have a dreamy season, winning 9 out of 10 races (1 abandonment) of the season. However, this season was not going to be without failures. Indeed, his main sponsor, Ski Roule, had financial problems and the company stopped sponsoring him. Gilles found himself without financial back up for the next 3 races of the season (Halifax, Trois-Rivières and Road Atlanta). He decided to go see his mentor, Gaston Parent, to get enough money to participate in the Halifax race. The March 76B changed his livery, the green got replaced with white and Parent didn’t have a specific sponsor so he decided to put the lily flower on the car. The rest is history; Gilles won the race and his performances allowed him to get a sponsorship with the company Direct Film (photo development company). This sponsor appeared on the car for the next race in Trois-Rivières, where he got the chance of competing against Formula 1 elitists. Then again, Gilles Villeneuve showed his natural driving talent by winning the race and by passing two Formula 1 legends, James Hunt, who was crowned Formula 1 World Champion at the end of the season and Alan Jones, first driver under Williams to win the World Championship. The McLaren driver, James Hunt, shocked by Gilles’ performance, returned to England and recommended the Quebecois to the Team as an elite driver.

In 1977, Gilles won his second title in the Canadian Atlantic Formula. This season was the turning point of his career because his dream to drive a Formula 1 would become reality because of the McLaren team. Who could have believe that the Berthierville’s driver, that came from nowhere and without money, was going to get a place in one of the most famous and powerful team and that, at 27 years old, which is old for a driver. In our next chronicles, we will talk about his journey in Formula 1.

If you want an article about Gilles Villeneuve or an item about Formula 1, it’s your chance! Actually, the museum is organizing an online auction during the Montreal Grand Prix. Many beautiful collection pieces will be available; paintings of Gilles, frames and signed caps (signed by Guy Lafleur, Gilles Villeneuve, etc.) To participate to the auction, simply click on the link below. It will redirect you on a website asking for your e-mail or phone number. After completing, a link will be sent to your e-mail or cellphone and you will be asked to give more general informations. Finally, you will be able to access to all the items available at the auction. We wish you good luck and a good Canada Grand Prix!

Our Partners and Collaborators